After a couple of very turbulent weeks in Bolivia we have continued our build. This pic is from the Hyperadobe walls in the making. A phase we are almost finishing now.

Let me look up a more recent picture. 1 sec….

The day to day hassle and organization around the build has absorbed most of my attention and put the larger project that Termitero is on hold. Now this beautiful warm month of reflection has come and is the time to pick up things were we left.

Here it is. One from yesterday.

Again. Quit a gap between posts. Somehow I will have to create a back log of posts based on the photo archives to put things in chronological order.

On this second photo of the same section of our first module you can see the maximum height has been reached. On top of the last row of Hyperadobe (containing 10% of cement in the mixture to function as ringbeam) I have laid a line or two of bricks to level the surface and to receive the wooden beams of the roof structure.

We have ‘extended’ our build already by planting 5 hardwood pillars creating a corridor. The roof will be supported by three lines of wood and or bricks. One on the top of the pillars. One on the front wall, and one on the back wall.

Yesterday I placed a recycled wood log on top of the front wall closing the front end of the bath room, as part of the middle line. The back wall I have raised with traditional bricks as well, a little cheating here for times sake. Also, this will be the wettest area in the shower, so Kind of practical too. The front wall of the bathroom we will create with mixed adobe techniques.

But first the roof!

Rain season is starting so it is pretty urgent.

Another photo next about the roofing urgency.

There is so much material to write about, I could write a book about it. Actually, I am just doing that. A guide about the Hyperadobe technique. There is a whole lot more to think of when it comes to building a adobe house, but I thought this relatively new technique is worth sharing so more about that coming soon. 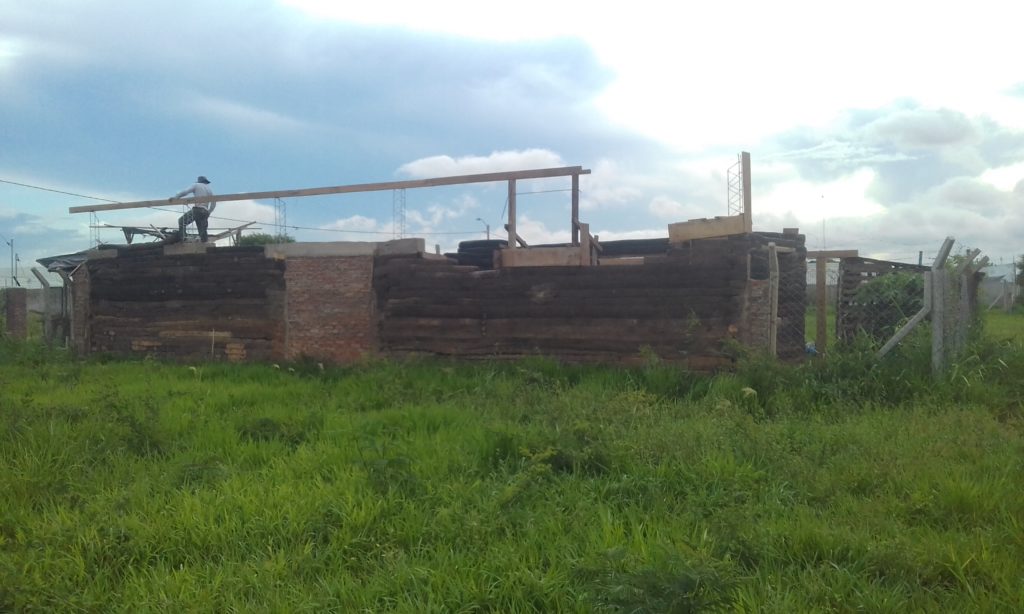 I noticed that consructors do not understand that Adobe is strong. They want to build pillars, add wood structures around it. There is no need for that. The only reason I put some small pillars on top of the back wall is a matter of urgency. We got way back on schedule because of a 3 week national strike so I had to take drastic measure to get the roof on fast.

I found some cut off metal at a bargain, and completed with seem more wood beams we build pillars on top of the back wall to support the roof structure.

There is still some filling to be done, but this fusion of old and new techniques is interesting. In fact, when I am saying that, Which one is the old technique? Confused here. As a matter of fact, my contractors for the roof do not know how to put a roof on my adobe walls, so I have to deliver them, wood, concrete, bricks and steel. They do know how to build on top of that. The fusion of materials is up to me.

It takes some though thoughts and sometimes just doing it and being creative, but it is working out just fine. 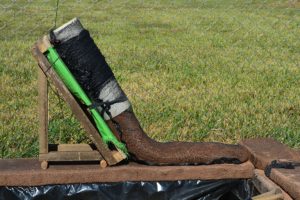 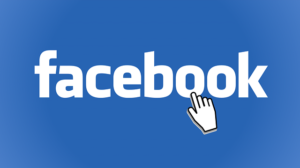 Join our Hyperadobe Group too! 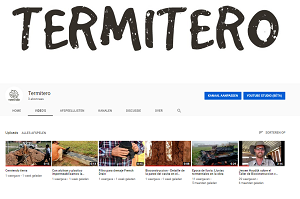